The Clear Lake Basin was shaped by a variety of processes over the last 1 to 2 million years. Scientists have recovered a nearly continuous sequence of lake sediments dating back 475,000. Other lake sediments in the region that date back to the Early Pleistocene, approximately 1.6 to 1.8 million years ago.

There is an excellent climate record from these cores for the last 127,000 years. The record documents a shift from pine dominated to oak dominated forests at the end of the Pleistocene Glacial Period 10,000 years ago, indicating a warming trend. The diatom sequence in these cores indicate that Clear Lake has been a shallow, productive system, essentially similar to the modern lake since the end of the Pleistocene Period.

The basin was created primarily from the stresses of the San Andreas Fault System, the eruption and subsidence of the Clear Lake Volcanics, and the erosion and deposition of the parent rock. The east-west extension of the fault system and vertical movements of the faults created and maintained the basin. Downward vertical movement within the basin created by these processes is at a rate approximately equal to the average sedimentation rate of 1/25 inch per year in the lake basin.

Since these rates are essentially equal, a shallow lake has existed in the upper basin for at least the last 475,000 years. If sedimentation rates were significantly different from the downshift, then either a deep water lake or a valley would have resulted. Although the lake has changed shape significantly over this period, it has generally been located in the same area as the existing Upper Arm.

Clear Lake is a naturally eutrophic lake. Eutrophic lakes are nutrient rich and very productive, supporting the growth of algae and aquatic plants (macrophytes). Factors contributing to its eutrophication include a fairly large drainage basin to contribute mineral nutrients to the water, shallow and wind mixed water, and no summertime cold water layer to trap the nutrients. Because of the lake's productivity, it also supports large populations of fish and wildlife.

Effects on the Lake

The algae in Clear Lake are part of the natural food chain and keep the lake fertile and healthy. Because of the lake's relative shallowness and warm summer temperatures, the algae serve another important purpose. They keep the sun's rays from reaching the bottom, thus reducing the growth of water weeds which would otherwise choke off the lake.

Along with Clear Lake's high productivity, algae in the lake can create a situation which can be perceived as a problem to humans. Algae are tiny water plants that cycle normally between the bottom and the surface, floating up and sinking down. During the day, algae generate oxygen within the lake; at night they consume oxygen.

Nuisance blue-green algae, however, can be a problem. From more than 130 species of algae identified in Clear Lake, three species of blue-green algae can create problems under certain conditions. These problem blue-greens typically "bloom" twice a year, in spring and late summer. The intensity of the blooms vary from year to year, and are unpredictable. The problem occurs when algae blooms are trapped at the surface and die. When this occurs, unsightly slicks and odors can be produced.

What Do I Need to Know About Interacting with Cyanobacteria?

Skin irritation or rash is a commonly reported health effect. Other symptoms range from gastrointestinal discomfort to neurological effects. The most severe reactions occur when large amounts of water are swallowed. Because dogs are smaller bodied than people and will tend to drink water when swimming or lick their fur, it is advisable to keep dogs out of the water during a cyanobacteria bloom.

If you decide to go in the water, avoid ingesting the water and rinse off with tap water soon after exiting. Use your own best judgment - When in Doubt, Stay Out!

For more information on Cyanobacteria, visit our Cyanobacteria page, and review a helpful Fact Sheet from the U.S. Environmental Protection Agency (DOCX).

Not a Recent Development

It does not appear that blue-green algae are a recent development in Clear Lake.

Sediment cores collected from the bottom of Clear Lake by the United States Geological Survey (USGS) indicate Clear Lake has been eutrophic with high algal populations since the last ice age, which ended approximately 10,000 years ago. To learn more, view an Algae Pollen Graph (PDF), which shows the change in algae pollen over time from a core in the Upper Arm.

Livingston Stone, a fisheries biologist, visited Lake County in 1873 and reported to Congress that Clear Lake had significant algal populations at the time.

It is a singular fact, illustrating the inaptness with which names are often given to natural objects, that the water of Clear Lake is never clear. It is so-cloudy, to use a mild word, that you cannot see three feet below the surface. The color of the water is a yellowish brown, varying indefinitely with the varying light. The water has an earthy taste, like swamp-water, and is suggestive of moss and water-plants. In fact, the bottom of the lake, except in deep places, is covered with a deep, dense moss, which sometimes rises to the surface, and often to such an extent in summer as to seriously obstruct the passage of boats through the water.

He further describes water conditions in September as:

Fish and fishing are about the same as in August. The weather is a little warmer. No one fishes during this month except the Indians, who still keep after the trout. The water this mouth is in its worst condition. It is full of the frothy product of the soda-springs. A green scum covers a large part of the surface, and it is not only uncleanly to look at, but unfit to drink; and yet, strangely enough, this lake, which one would think uninhabitable by fish, fairly teems and swarms with them.

These descriptions appear to describe blue-green algae and conditions similar to that in the last 20 years. The "moss" described in the first passage could be rooted plants or the filamentous algae Lyngbya, which behaves in a similar manner. Regardless, this moss indicates a relatively clear lake if sunlight is penetrating sufficiently to promote growth of "moss" on the bottom. View the full text of Stone's Writings About Clear Lake (PDF). 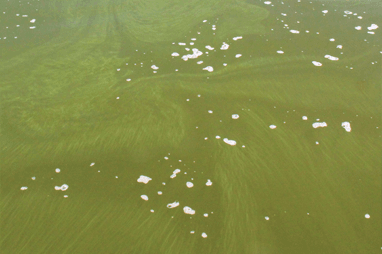 Other historical accounts indicate the lake was relatively clear through 1925. Substantial declines in clarity and increases in scum forming algae (blue-green algae) occurred between 1925 and 1939. An increase in nutrient loading from increased erosion, fertilizer and wastewater discharges due to urban and agricultural development were the probable causes of increased blue-green algal growth.

The advent of powered earthmoving equipment increased the amount of soil disturbance and facilitated large construction projects, such as the Tahoe-Ukiah Highway (State Highway 20), the reclamation of the Robinson Lake floodplain south of Upper Lake, stream channelization and the filling of wetlands along the lake perimeter. To support the development, gravel mining increased within the streams, further increasing erosion and sediment delivery to Clear Lake.

During this time period, mining techniques at the Sulphur Bank Mercury Mine changed from shaft mining to strip mining, resulting in the discharge of tens of thousands of yards of overburden directly into Clear Lake.

Limnological studies of Clear Lake began in the early 1960s to determine the causes of the high productivity in Clear Lake. It was found that the lake is nitrogen limited in the summer, with a great excess of phosphorus within the system. Phosphorus in the water column comes from both the annual inflows and nutrient cycling from the lake sediments. Nitrogen limitation does not affect many blue-green algae, as they were able to utilize (fix) nitrogen from the atmosphere, and consequently have an essentially unlimited supply of nitrogen. This gave these blue-green algae a competitive advantage, and Anabaena and Aphanizomenon dominated the lake during the summer. A third blue-green algae, Microcystis, also occurred in significant quantities. During this time period, it was also determined that iron was a limiting micro-nutrient.

During the 1971 to 1975 time period, the Clear Lake Algal Research Unit (CLARU) under the direction of Dr. Alexander Horne (University of California - Berkeley) evaluated the Clear Lake system and conducted numerous experiments. As phosphorus levels in the lake were five to fifty times as high as the "limiting" concentration, Horne did not believe phosphorus reduction would result in blue-green algal reductions, but changes to reduce nutrient cycling from the sediments held the key to reducing blue-green algal reduction.

During the late 1980s and early 1990s, the Lake County Board of Supervisors created the Algae Committee to evaluate algae abatement methods. Numerous methods were evaluated for reducing the nuisance conditions created by blue-green algal mats that form along the shoreline area. When the algae in these mats die and decay, they create an odor, similar to raw sewage.

Starting in the summer of 1990, lake clarity improved significantly. This improved clarity has continued until the present. Learn more by viewing a Graph of the Secchi Depth (the depth into the water at which a black and white checked plate is visible) in the Upper Arm from 1969 through 2008 (PDF).

During the 1991 to 1994 time period, University of California researchers led by Doctors Peter Richerson and Thomas Suchanek analyzed lake water quality data collected for the previous 15 years, conducted experiments and evaluated the Clear Lake system. Unfortunately, little data was available during the period of improved clarity since 1990. The Clean Lakes Report (PDF) determined that excess phosphorus is a major cause, however, iron limits the growth of blue-green algae. The Report hypothesized that the increased clarity observed in 1990 was due to drought conditions. The Report recommends numerous strategies to reduce phosphorus loading (which also reduce iron loading), including stream channel and wetland protection and rehabilitation, and erosion reduction.

The improved water clarity and reduced blue-green algal blooms continued into the new millennium. Department of Water Resources (DWR) data collected since the Clean Lakes Report was evaluated by Lake County staff in 2002. The improved clarity continued, in spite of the wet years of 1995, 1997 and 1998, indicating the improved clarity was probably not drought related. Surprisingly, phosphorus and total nitrogen concentrations in the lake did not change substantially when the lake clarity increased. Cursory review of the data did not provide evidence of chemical changes that led to the improved clarity and reduced blue-green algal blooms in Clear Lake.

In late 2002, the State started the process of developing the Nutrient Total Maximum Daily Load (TMDL) for Clear Lake. County staff requested an update of the Clean Lakes Report, as some of the primary assumptions (phosphorus reduction leads to improved clarity and improved clarity resulted from drought) appeared to be partially incorrect. The Clean Lakes Report was not updated and the Nutrient TMDL for Clear Lake was adopted by the Central Valley Regional Water Quality Control Board in 2006.

As required by the Nutrient TMDL, in 2007 to 2008 the County and other stakeholders have prepared the Monitoring and Implementation Plan, Clear Lake Mercury and Nutrient TMDLs (PDF), which identifies past, present and proposed actions taken to reduce the nutrient loading in Clear Lake.

In 2010 and 2011, Lake County participated in research by University of California - Santa Cruz researcher Dr. Cecile Mioni. No state funding was available in 2010, and a limited report was developed. In 2011, The State Water Resources Control Board Surface Water Ambient Monitoring Program (SWAMP) funded the research in the Sacramento-San Joaquin Delta and Clear Lake.